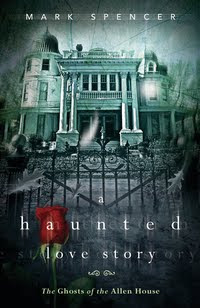 A Haunted Love Story is two tales in one: a modern family’s attempt to embrace their strange, spirit-inhabited home and a vintage love affair kept secret for six decades.
When Mark Spencer bought the beautiful old Allen House in Monticello, Arkansas, he knew that it was famously haunted. According to ghost lore, the troubled spirit of Ladell Allen, who mysteriously committed suicide in the master bedroom in 1948, still roamed the historic mansion. Yet Mark remained skeptical—until he and his family began witnessing faceless phantoms, a doppelganger spirit, and other paranormal phenomena. Ensuing ghost investigations offered convincing evidence that six spirits, including Ladell, inhabited their home. But the most shocking event occured the day Mark followed a strange urge to explore the attic and found, crammed under a floorboard, secret love letters that touchingly depict Ladell Allen’s forbidden, heart-searing romance—and shed light on her tragic end.
This book is on my to-read list when it comes out in January of 2012. Check out more information about the book from:
http://www.llewellyn.com/
Posted by Unknown at 12:00 AM

Email ThisBlogThis!Share to TwitterShare to FacebookShare to Pinterest
Labels: A Haunted Love Story