The Southern Belle's Guide to Witchcraft 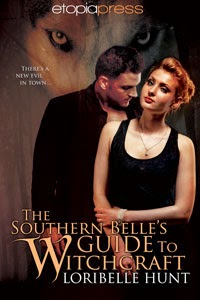 There’s a new evil in town, and it’s gunning for Scarlet...

Scarlet Burke isn’t an ordinary witch. She comes from a long line of Burke witches, whose job it is to protect the good folks of Purgatory, Alabama from things that go bump in the night—and things that might slip through the portal in Fool’s Wood. Normally, it’s an easy gig that doesn’t take much time from her day job. Until her ex-husband turns up dead in a ritualistic killing no one recognizes. William, a mundane, had high-tailed it out of town years ago after getting Scarlet’s baby sister pregnant. So why had he come back? Better yet, who (besides Scarlet) had wanted him dead badly enough to lure him to the forest, stake him, skin him, and drain his blood? It wasn’t a vampire kill, but she was damned if she could determine what it was.

Werewolf Jake Mills, the bossy and possessive chief of police, can’t believe anyone in his town could commit such a brutal crime. And Scarlet can’t believe she’s still trying to avoid his advances. Jake has been chasing her for years, and if he wasn’t so charming—and so drop dead sexy—she might try harder to outrun him. Or at least summon a bit of self-control. But the man simply refuses to stay in the “Just Friends” box she’s placed him in.

But when the killer targets Scarlet’s family, ghouls, demons, and dark fae all come under suspicion. And when her daughters become the targets of an ancient dark ritual, Scarlet and Jake are forced to make an impossible choice. Fight evil with evil, or watch Scarlet’s daughters die...

Although the house wasn’t as haunted as the local kids claimed, it did have a minor spirit hanging about. But it wasn’t a ghost that put Scarlet on edge when she parked her car. One powerless little haint was not the problem. She and the spirit had a deal. As long as it didn’t try to scare anyone into a heart attack, she wouldn’t blast it into oblivion. It sure as heck wasn’t what made her senses tingle with the anticipation of a good fight. She swept a cautious gaze around the lawn before stepping out. Nothing looked out of the ordinary, but that didn’t mean a damned thing in her hometown. Good thing she’d come to check up on the place before her new renter arrived.

Purgatory, Alabama, was a crossroads between worlds. Deep in Fool’s Woods was a portal that connected Earth and another land, Terra. Mirrors of each other, she’d heard it said, yet opposites. She sent back anything unwanted that came through. Well, her and her family, Guardians all.

The small hairs on the back of her neck stood on end when she stepped onto the walk. Something supernatural skulked nearby. She’d known that, but damn it, it was midafternoon and too hot to deal with things that went bump in the night. Though whatever lurked obviously wasn’t limited to darkness.

She took her time approaching the house, letting her senses flare out as she walked. Azaleas created natural boundaries up both sides of a lawn dotted with dogwoods and huge old magnolias. Big terra-cotta pots overflowing with flowering perennials were spaced evenly along the deep front porch. The place was a Southern belle’s dream, built for balls and garden parties. Its utility bills were a cheapskate’s nightmares, though.

Despite the picture-perfect scenery, the prickling on her skin grew as she paced forward. Halfway up the walk, she spotted the culprit, a stout-looking brownie perched under a tree. Unease morphed into irritation in two seconds flat. Damn it, she was wearing a new skirt. And heels. Any other day of the week, she wouldn’t have worn them. She should have known better. Today’s outfit was a far cry from her usual day-job clothes: jeans and sturdy shoes. But it was Monday, which meant a town council meeting, which meant getting lectured by her mother for not taking her duties seriously enough to dress the part. Like she normally went hunting down the creepy-crawlies in anything but jeans and boots?

Too late now. She could hear Momma in her head saying the same way she’d done hundreds of times: as soon as you let your guard down the bogeyman comes out to play. But oh hell no. She was not chasing that little hellion down while wearing heels. Somehow her mother always seemed to pull it off in pearls and fancy shoes and pencil thin skirts, ending victorious with not one hair out of place. Not Scarlet. Even with no chasing she’d probably end up a red-faced, bedraggled mess.

On the Broomstick
http://onthebroomstick.blogspot.com/
Spotlight

6.      March 20th
Taking it One Book at a Time
http://takingitonebookatatime.blogspot.com

Loribelle is like the South she calls home. Hot and sultry. Languid and sexy. Magnolias and gardenias scent her silk lined boudoir, and men and children alike bow to her magnificence...

Okay, maybe it isn't quite that glamorous. She does have two smart and lovely daughters who give her a run for her money and a son that will one day be someone's model of a romance hero. (She promises.) Her husband is a real life hero, and Loribelle just tries to keep up with the demands of military life. In between, she writes a book or two.

She's had every job under the sun, but haven't most writers? That Army military police, bookstore manager, waitress, wedding photographer, website designer experience has to come in useful sometimes. As they say in the South, it all washes out in the end.

Amazon
Kobo
iTunes
Posted by Unknown at 12:00 AM 1 comments