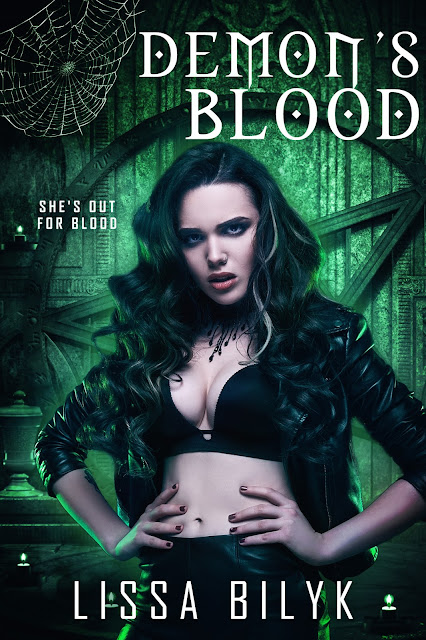 In Tales from Harborsmouth, readers get to delve deeper into the award-winning world of Ivy Granger with two novellas and two exclusive short stories.

Ivy Granger is a psychic detective with ties to Harborsmouth's paranormal underworld. Too bad those ties tend to ensnare Ivy and her friend Jinx in the Machiavellian schemes of the city's teeming population of bloodsucking vampires and psychotic faeries.
FROSTBITE (Ivy Granger #0.5)

In this Ivy Granger prequel, join Ivy and Jinx on a disturbing case that leads down a dead end alley to a house ravaged by time and circumstance.
Everyone knows that there's no such thing as ghosts, but when a client claims that her house is being haunted, Ivy tries to keep her mind open and her weapons handy. If her psychic gifts and recent cases have taught her anything, it's that you're better off arming yourself for the unexpected. Anything is possible in Harborsmouth.
BLOOD AND MISTLETOE (Ivy Granger #1.5)
Holidays are worse than a full moon for making people crazy. In Harborsmouth, where many of the residents are undead vampires or monstrous fae, the combination may prove deadly.
Holidays are Hell, a point driven home when a certain demon attorney returns with information regarding a series of bloody murders. Five Harborsmouth residents have been killed and every victim has one thing in common--they are fae. Whoever is killing faeries must be stopped, but they only leave one clue behind--a piece of mistletoe floating in a pool of the victim's blood. The holidays just got interesting.
CLUB NEXUS (Ivy Granger #2.5)
A demon, a human, an Unseelie faerie, and a vampire walk into a bar...
These four intertwining short stories are set in Club Nexus, the hidden haunt of Harborsmouth's paranormal underworld.
Iced: A bargain gone wrong leads a highborn Unseelie faerie to life as an enslaved bartender with a taste for revenge.
Dusted: Being a highly skilled predator doesn't necessarily put you at the top of the food chain at Club Nexus. A southern vampire with a hankering for blood and wanton violence may have bit off more than he can chew.
Demonized: The demon attorney we love to hate has his eye on a certain rockabilly human. Too bad she's brought a crossbow loaded with holy water dipped bolts for this night on the town.
Jinxed: Just when Jinx needs a carefree girl's night out with Ivy, a smoking hot demon tries to buy her a drink. She really is the unluckiest human on the planet.
THRILL ON JOYSEN HILL (Ivy Granger #5.5)
Few places are as rife with opportunity or as fraught with danger as Harborsmouth's notorious Joysen Hill. Vampires own the real estate, and even the most ruthless human thugs won't venture there after dark, but when Torn gets stuck babysitting, he can only think of one place in Harborsmouth interesting enough to take a demon toddler, a teenage bridge troll, and a grouchy hearth brownie. What happens next substantiates the city's advertising slogan. No matter who or what you are, no matter how young or old, you can find your thrill on Joysen Hill.

This promotion is brought to you by Pure Textuality PR. From Examiner’s Recommended Women in Horror comes THE MARKER CHRONICLES by Danielle DeVor. The First Trilogy contains books 1 – 3. Now, for a limited time, save BIG by buying this special bundle deal at a killer price!

Not All Exorcists are Equal....One is Marked When defrocked ex-priest, Jimmy Holiday, agrees to help an old friend with his sick daughter, he doesn’t expect the horrors that await him. Blackmoor, his friend’s new residence, rests upon the outskirts of the town of Sorrow’s Point. The mansion’s history of magic, mayhem, and death makes it almost a living thing – a haunted mansion straight out of a Stephen King novel. Jimmy must decide if the young girl, Lucy, is only ill, or if the haunting of the house and her apparent possession are real. After the house appears to affect him as well with colors of magic dancing before his eyes, rooms warded by a witch, and a ring of power in his voice, Jimmy is met by a transient who tells him he has “the Mark.” Whatever being “marked” means, Jimmy doesn’t care. All he wants to do is help Lucy. But, helping Lucy means performing an exorcism.

Uncovering The Truth…Will Take An Exorcist Jimmy Holiday, defrocked priest turned exorcist, is trying to get his life in order. With his on-again off-again witchy girlfriend moving in, the spirit of the little girl from his last exorcism hanging around, and a secret organization of exorcists hounding him, Jimmy equals stressed. When a stranger calls in the middle of the night asking for help with a possession, Jimmy is about to land in a mess of trouble. Especially since the man on the phone claims to have gotten his number from Jimmy’s old mentor. Too bad his mentor has been dead for years. After a mysterious silver flask arrives at his doorstep, Jimmy is left with two options: either ignore the newest enigma the universe has tossed him, or listen to Lucy and travel to Arizona to solve the mystery before all hell breaks loose…again.


Some things are worse than demons. Jimmy Holiday, reluctant exorcist, is finally getting the help he needs from the higher-ups. The Order of Markers is sending him to the Vatican’s exorcism school. Now, he’ll receive the training he should have gotten at the beginning. One problem, someone wants to sabotage him. When his time at the school is cut short, Jimmy receives an interesting new case. It is the assignment that no one wants—a corpse has come back to life. And it isn’t a zombie. Too bad nothing goes as expected. Armed with his usual bag of tricks, Jimmy thinks everything will eventually be all right. Well, that is until his betrayer turns out to be the person he trusts most. Named one of the Examiner’s 2014 Women in Horror: 93 Horror Authors you Need to Read Right Now, Danielle DeVor has been spinning the spider webs, or rather, the keyboard for more frights and oddities. She spent her early years fantasizing about vampires and watching “Salem’s Lot” way too many times. When not writing and reading about weird things, you will find her hanging out at the nearest coffee shop, enjoying a mocha frappuccino.