King of Bones and Ashes by J.D. Horn 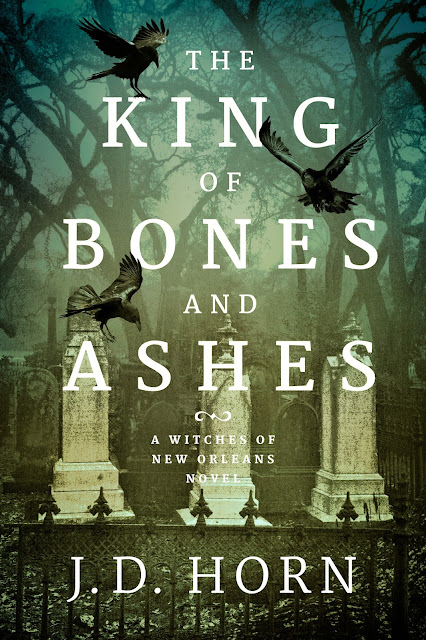 From the Wall Street Journal bestselling author of the Witching Savannah series comes the story of a young witch’s quest to uncover her family’s terrifying history...

Magic is seeping out of the world, leaving the witches who’ve relied on it for countless centuries increasingly hopeless. While some see an inevitable end of their era, others are courting madness—willing to sacrifice former allies, friends, and family to retain the power they covet.

While the other witches watch their reality unravel, young Alice Marin is using magic’s waning days to delve into the mystery of numerous disappearances in the occult circles of New Orleans. Alice disappeared once, too—caged in an asylum by blood relatives. Recently freed, she fears her family may be more involved with the growing crisis than she ever dared imagine.

Yet the more she seeks the truth about her family’s troubled history, the more she realizes her already-fragile psyche may be at risk. Discovering the cause of the vanishings, though, could be the only way to escape her mother’s reach while determining the future of all witches.
.

Early Praise for The King of Bones and Ashes:

Horn’s rich characterizations and setting, sparkling magic, and creepy villains bolster the narrative, and his focus on women as major players is particularly refreshing. The terrifying conclusion will have readers looking forward to the next installment.
—Publishers Weekly

The witch is dead and Mercy Taylor needs to find out who killed her in Horn's intriguing debut… This tightly paced, entertaining series opener shows great potential.
—Publishers Weekly

ABOUT THE AUTHOR
J.D. Horn, the highly praised and bestselling author of the Witching Savannah series, now debuts a new contemporary fantasy series, Witches of New Orleans. A world traveler and student of French and Russian literature, Horn also has an MBA in international business and formerly held a career as a financial analyst before turning his talent to crafting chilling stories and unforgettable characters. His novels have received global attention and have been translated in more than half a dozen languages. Originally from Tennessee, he currently splits his time between Central Oregon, San Francisco and Palm Springs with his spouse, Rich.

Amazon
Posted by Unknown at 5:53 PM