Grail of the Summer Stars: A Visit With Freda Warrington 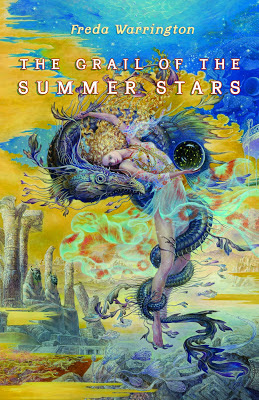 GRAIL OF THE SUMMERSTARS
By Freda Warrington

“A classy, beautifully rendered tale that persuasively builds from low-key beginnings into a complex enterprise with real heft, a rich back story and
characters that grow with the narrative. A must for existing fans, while being easily accessible to newcomers.”
—Kirkus Reviews

INFORMATION ABOUT THE BOOK/AUTHOR

A painting, depicting haunting scenes of a ruined palace and a scarlet-haired goddess in front of a fiery city, arrives unheralded in an art gallery with a cryptic note saying, “The world needs to see this.” The painting begins to change the lives of the woman who is the gallery's curator and that of an ancient man of the fey Aetherial folk who has mysteriously risen from the depths of the ocean. Neither human nor fairy knows how they are connected, but when the painting is stolen, both are compelled to discover the meaning behind the painting and the key it holds to their future.

In a haunting, powerful tale of two worlds and those caught between, Freda Warrington weaves an exciting story of suspense, adventure and danger that fulfills the promise of the Aetherial Tales as only she can. This stand-alone novel will appeal to readers of urban and modern fantasy and grab the attention of fans who love dark and sinister tales.

Maiden, Mother, Who? By Freda Warrington

Just a few weeks ago I was the fantasy Guest of Honour at Eastercon (UK) and we had a panel entitled, “Maiden, Mother, Who?” discussing the invisibility of older characters, specifically older women, in fantasy fiction. This is a subject very dear to my heart. By coincidence I had pulled a book down from my attic – one I first read in the early 1990s – to reread. That book is The Crone by Barbara G Walker. You probably know it. In it, Ms Walker explores how the figures of the Crone, the Wise Woman, the Witch, indeed older women in general, have become invisible in our culture. And not only invisible but – not so very far in the past – reviled as evil, and even mass-murdered, hanged, burned at the stake. Her thought-provoking study examines how women were once attributed with supremacy over life and death – naturally so, since it’s women who give birth, and have always acted as midwives, healers, layers-out of the dead. Terrifying, dark goddesses such as Kali were believed to have the powers both of Creation and Destruction: the power to destroy all other gods and to consume everything into her black Abyss at the end of time.

Walker dissects how male religions arose and set about rejecting the dark goddess – far too terrifying! – by crushing all aspects of female wisdom, sacredness and autonomy. This was in a futile urge to deny Death itself. Female religion was circular, a churning cauldron of life, death and rebirth. Male religion was linear: one life, one God, one afterlife in eternal bliss or torment. In the process, the Crone figure of the older woman was demonized until she became virtually invisible. (Really, if you haven’t read Ms Walker’s book, just read it!)

We’re still living with the consequences today. In spite of a long battle for equal rights, there remain societies in which women are treated like scum. In the West, one of the greatest sins a woman can commit – at least in the public eye – is to grow old. In my Aetherial Tales (and other novels) I try to do my bit to redress the balance.

Themes of paganism and ancient earth magic weave through most of my novels, sometimes blatantly so and sometimes more subtly. The Crone, and numerous other books on female spirituality, helped me understand how the idea that women are naturally secondary and subservient to men is a Great Big Lie. What a relief to know that! However, the idea is distressingly persistent. We seem to be taking backward steps, if anything, as young girls are treated as sex objects and women still fight to be taken seriously. The term “witch” is still used as an insult, and there are countries where “witches” are still persecuted and murdered. Sometimes you’d hardly know we were in the 21st century!

My novel Midsummer Night revolves around Juliana Flagg, a sixty-something sculptor and grande damewho is a legend in the art world and something of a character, to say the least. She also appears in the new novel, Grail of the Summer Stars, to advise and guide Mistangamesh (a young man we first met inMidsummer Night) on the next step in his difficult journey. Juliana was one of those characters who leapt into my head fully formed, as it were, and she’s been hanging around for at least fifteen years before I found the right story for her. I imagine her as a tall, strong woman, silver-haired, bohemian, usually dressed in pale grey silks and velvets so she is like a tower of silver. She’s sharp-tongued, confident, intolerant of fools. That’s not to say she lacks warmth, or insecurities, or has no fear of ageing. Yet she faces the future with courage, remarking that when she dies, they will have to fell her like a tree and lash her to the back of a truck!

Of course Grail has younger characters too, and others who are ancient yet ageless – but writing Juliana was so much fun, I don’t know why anyone would shy away from wanting to write or read about older characters. Others crop up in my Aetherial Tales series – but I try to show them as real people, not all-powerful fantasy sorceresses. In Grail we also meet the tough, angular Frances Manifold, who is trying not to fall apart as she fears her missing son is dead. And we meet a character who first appeared in Elfland:the more obviously witchy Virginia Wilder, who never tells people what to do but subtly guides them onto the right path. These are women who have to deal with their own flaws and potential frailties – but they have guts, good sense and personality, and at their core they are strong, strong, strong.

The panel discussion left me somewhat optimistic as we uncovered lots of examples of strong, powerful, older female characters in SF and fantasy. The situation’s not as dire as I’d feared! In the real world, too, more attention is being paid to older females – usually in the shape of Helen Mirren, Judi Dench, or Sophia Loren! Which raises the question, can you only remain visible as you grow older by being a glamorous film star? The academic Professor Mary Beard, who presents historical documentaries for the BBC, has come in for irrational criticism for refusing to glam up, having unkempt grey hair and crooked teeth. For goodness’ sake! She is a Professor of Classics at Cambridge University and a fantastic presenter! But I think the tables are turning. People of discernment love Mary Beard. And folk the world over adore the Queen, who seems to be admired more and more the older she grows. Truly a woman of wisdom, compassion and power.

So let’s hope we can look to a future where the older female – both in real life and in fiction – is no longer denigrated for her lack of youth and fluttering eyelashes, but celebrated for her long, rich life and simply for her magnificent self. 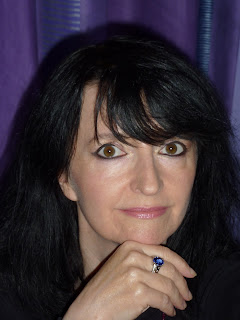 FREDA WARRINGTON, who was born in and lives in Leicestershire, England, is the author of twenty novels. This is her third Aetherial Tales novel, her first series to be published in the United States. The first,Elfland, was named Best Fantasy of the Year by RT Book Reviews. For more information, please visitwww.fredawarrington.com

I am utterly transfixed as I delve into the pages of this book. Stay tuned for an upcoming review!
Posted by Unknown at 4:30 AM