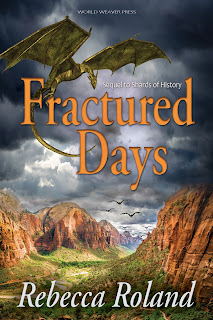 When it comes to naming characters, I prefer coming up with names in fantasy settings more than any other. Sometimes I take actual names and tweak them a little. Sometimes I come up with a name I think is unique, only to find out that it exists already. And sometimes I just use actual names.

The main character in my latest novel, Fractured Days, was originally named Mila, but a few beta readers told me the name didn't work with the setting and the character's culture. I was so disappointed. I really liked the name, but I figured if more than one person noticed enough to mention it, then I should reconsider. I messed around with different names and finally settled on Malia as it had a similar sound and seemed to fit the setting better.

In general I tried to use names for Malia's people, the Taakwa, that sounded more pleasant. They're a gentle people, for the most part, and so I wanted their names to reflect that. The Maddion, on the other hand, are ruthless. They raid other people, they enslave anyone they capture, and they're willing to do anything to get what they want. They see themselves as superior to other people. So they get harsher sounding names, like Kushtrim or Muvumo. They get names that don't inspire sonnets.

The Jeguduns are gargoyle-like creatures who were once enslaved by the Maddion, but with the help of the Taakwa became free. Most of them tend to have a good sense of humor, although when it comes to defending their homes and loved ones, they don't hesitate to use their talons and teeth to the very end. They tend to have short, fun names like Aru or Tula.

And finally there's the changer. She's a powerful being who can change her form when she works her magic for somebody else. She calls herself Sersha, which is a deceptively soft sounding name. The Maddion call her 'changer' for what she can do for them, but the Taakwa and the Jeguduns know her as 'mutara,' which, in all honesty, I probably dug up from my subconscious because I love Star Trek II, The Wrath of Khan, but I swear I wasn't thinking about it at all when I came up with the term. I was going for a word that suggested change, or mutation. 'Mutara' is also the name of the nebula in Star Trek where Khan detonated the Genesis Device, creating the Genesis Planet. And there's your nerd trivia for the day!